Parallax is the apparent difference in the location of an object based on point of view. With satellite data this is always something important to consider, because the features you see may not actually be where they appear. This is the first of a three part series focused on the parallax problem. This introduction will review orbital characteristics of the two most common types of meteorological satellites with very different parallax issues. The next two parts will describe those issues in greater detail.

As depicted in the illustration to the right, the apparent position of clouds can be a bit different than their actual location depending on the angle of view. At large viewing angles, high clouds are displaced a greater distance than low clouds, so the apparent size of a feature can be exaggerated.
In order to account for parallax, it’s necessary to understand the orbital characteristics of the two basic types of satellites for meteorological data — geostationary and polar — since that is what determines their viewing angle over Alaska. 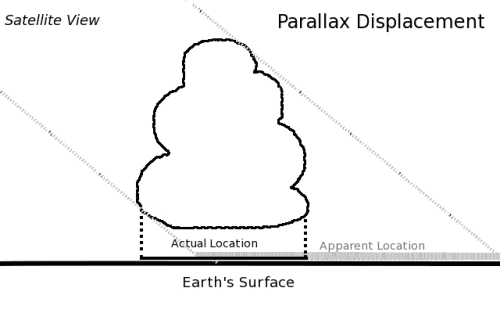 Satellites and Their Types

Geostationary satellites (named GOES in the US) are centered over the equator and set to orbit at the same speed as the earth’s rotation (geosynchronous) so they can continuously view the same portion of the globe. To do this they must be at a very high altitude, roughly 22,000 miles from Earth’s surface. The advantage of this is the ability to precisely monitor cloud motion at very high temporal frequencies. For example the GOES-R satellite, launched in late 2016, is capable of routinely providing imagery over the same location at 1 min intervals. However, one disadvantage in Alaska is the large viewing angle. 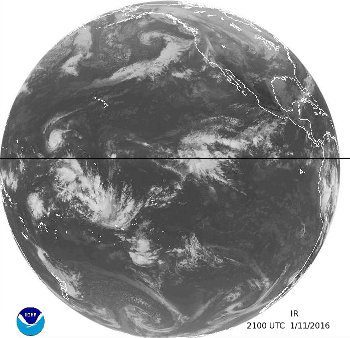 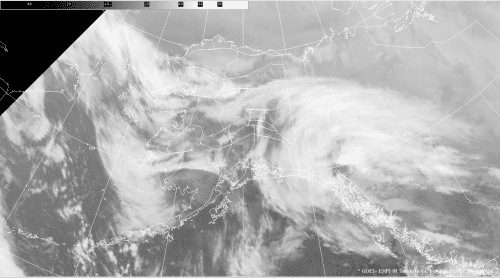 The full disk Infrared (IR) image above is an example of the earth view as seen by the current GOES satellite with Alaska very close to the northern edge.Mapping that GOES IR imagery to a polar stereographic view focused on Alaska (left) doesn’t actually look that bad from a distance, despite the large angle.
But zooming in closer (right), you can see how cloud features get very distorted over northern Alaska and the Arctic. This is also where cloud displacement due to parallax becomes very large. With the 2016 GOES-R satellite, resolution improved by four times, however, parallax over the state is still a problem. 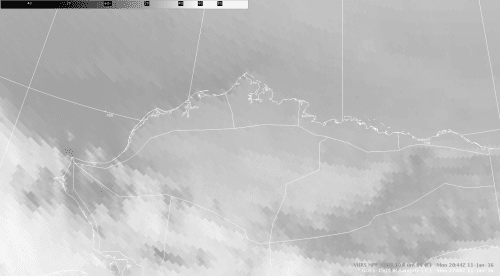 Polar satellites orbit over the poles at a substantially lower altitude, around 850 miles, and at a much faster speed. It takes around 90 minutes for a polar satellite to complete one full orbit around the earth. As the earth turns below it, the swath of each pass covers an area just to the west of the previous pass. There is usually some overlap with successive passes that is dependent on latitude and the width of the swath. Polar regions have more frequent overlapping coverage since the orbital tracks always pass near the poles. 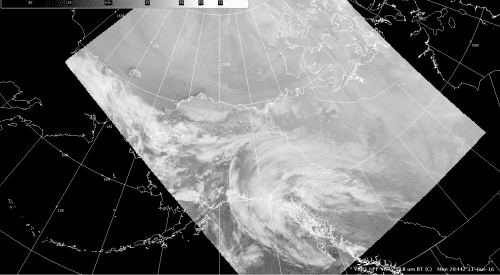 The example above is an SNPP VIIRS IR image from around the same time as the previous GOES IR image. This is the first of a new generation of satellites from the JPSS satellite program with significant improvements over the previous polar fleet. The next of these new satellites, JPSS-2, is scheduled for launch in late 2022.
Polar satellite imagery instruments typically scan around 50-60 degrees to the left and right as they pass over the earth. The center of the scan along the track of the satellite (nadir) looks straight down, so this portion of the imagery has virtually no parallax displacement. Also, because of the lower orbit, these satellites will have much higher resolution in the polar regions. 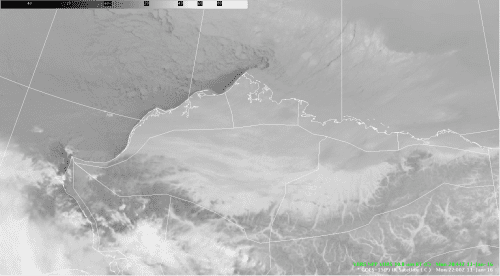 This close up of the SNPP VIIRS IR image (left) is at the same scale as the previous GOES image, but it reveals much greater detail over northern Alaska and the Arctic. Since the satellite is looking more directly downward, we can expect little displacement of clouds and other features due to parallax. However, that would not be the case near the edge of the scan where parallax increasingly becomes an issue.

So, both types of satellites have some amount of parallax displacement in locations where their viewing angles are large, which is a function of their orbit. The next two parts will focus on each of these types in greater detail.